From Omni Commons
Jump to navigation Jump to search
The printable version is no longer supported and may have rendering errors. Please update your browser bookmarks and please use the default browser print function instead.

Creating culture can be a difficult task. Lots of though and time goes into documents such as the Safer Space Policy. How, though, do we update our community agreements as the culture grows? When new and exciting opportunities and issues arise our culture needs to be able to adapt.

Currently changes to community agreements are handled mostly though consensus processes. Let's consider an abstract example, a few people wish to bring a Hoobaldada into the space, there are some costs associated with housing the Hoobladada and while people are generally fine with it, the location is disputed. The Hoobaldada proposal is brought to a consensus meeting, it's location is discussed ad nauseum and the costs are broken down and also discussed quite a bit. Each location for the Hoobaldada is imagined by the group and the pro's and con's are considered abstractly. The aim, as you might know, of a consensus meeting is to come to an agreement and create a some what permanent decision and to end discussion around the proposal, hopefully in a way that leaves everyone feeling okay about it.

So the proposal passes after a lot of discussion and time investment. We are left with a decision for where to put the Hoobaldada, it's not exactly where people really wanted it, but it's okay. As time goes by it's seen that it doesn't really work in it's current configuration but the idea of making another proposal isn't all that appealing and we are left with a Hoobaldada that isn't making people as happy as it could.

Let's consider another way, the Change Up Meeting.

The Change Up Meeting is a reoccurring gathering (weekly, monthly, etc.) where all invested members of the community meet and work on the Community Mastery Board (CMB). The CMB has four columns labeled:

Column names of the Community Mastery Board

Topics enter into the process as an awareness. Community members share something they are aware of. This could be a problem or an opportunity available to the community. At any time anyone can leave a sticky note on the awareness column of the CMB.

Each week (or month, etc.) in the Change Up Meeting items from the CMB are discussed as a group. As we reflect on each item in the awareness column the group attempts (if needed) to imagine a way to deal with the item and select one to try and move the note to implement. If we don’t have any ideas then the item stays in awareness.

Once a solution is implemented we try it out for the week or two. The items in the implement column are limited in number because we don’t want to be introducing too many new rules or procedures at once. Each week we reflect on how well each particular solution is working. Are people abiding by the new procedure? Is the community happy with it?

Rather than have a long processes driven meetings about the implemented solution where we voice concerns and attempt to codify a community agreement in one sitting we do rapid testing of our agreements. Over the course of the week new agreements are tested and community members can “vote with their feet” where if they like a particular agreement they can promote it during the implementation week, remind people that we are trying it out, and build support for it.

Once an agreement has been implemented we revisit it at each Change Up Meeting where we either:

If an agreement has reached a point where it has passed a certain threshold defined by the community it can then be elevated to the mastery column.

This diagram illustrates how a single item might move through the process: 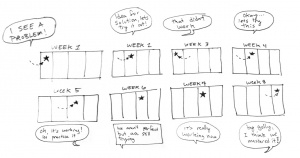 Let's go back to the absurd example from above. Someone becomes aware that a Hoobaldada is available and they put a note under awareness on the Community Mastery Board. At the next Change Up Meeting someone suggests putting the Hoobaldada in the front entry way, some people aren't really into that idea but they are fine to try it out knowing that next Change Up Meeting it will be addressed if it isn't working. So the Hoobaldada topic is moved to the implemented column and a note is added about moving it to the entry way.

At the next Change Up Meeting it's obvious that some members of the community aren't happy with the Hoobaldada in the front entry way, they suggest moving it to the basement. It is agreed to give that a try and the process repeats. By the next meeting the community is feeling good about the placement and decides to move the topic to the practicing column. Now each week the topic will be briefly mentioned, if issues come up then further implementations can be experimented with. After a little more time the Hoobaldada feels quite at home in it's location and the group decides to move the topic to mastery.

The Hoobaldada example is dealing with a thing in the community. While this process could work very well with things it works really well with community behavior. As people become aware of issues the Change Up Meeting is a way to try, practice, then master behaviors to better the whole community. For instance one example of a practice already mastered by the Omni community is to abide by the Safer Space Policy.

All the items in the Mastery column make a complete list of community agreements. By using the Community Mastery Board the community develops and makes explicit what how the community opperates. This gives a very clear picture to new comers what their expected behavior is.

The Change Up Meeting process gives all members of the community a clear means to change up the behavior of the whole community through a process that doesn't require lots of process as seen in the consensus process.